Over a year ago, the parents of Nikolas Cruz were sued for failing to supervise and protect their son during his violent behavior. The lawsuits never led to criminal charges against them, but what is curious about this most recent story is that two attorneys say they are not fleeing town in fear of any potential repercussions from the shooting or its aftermath. 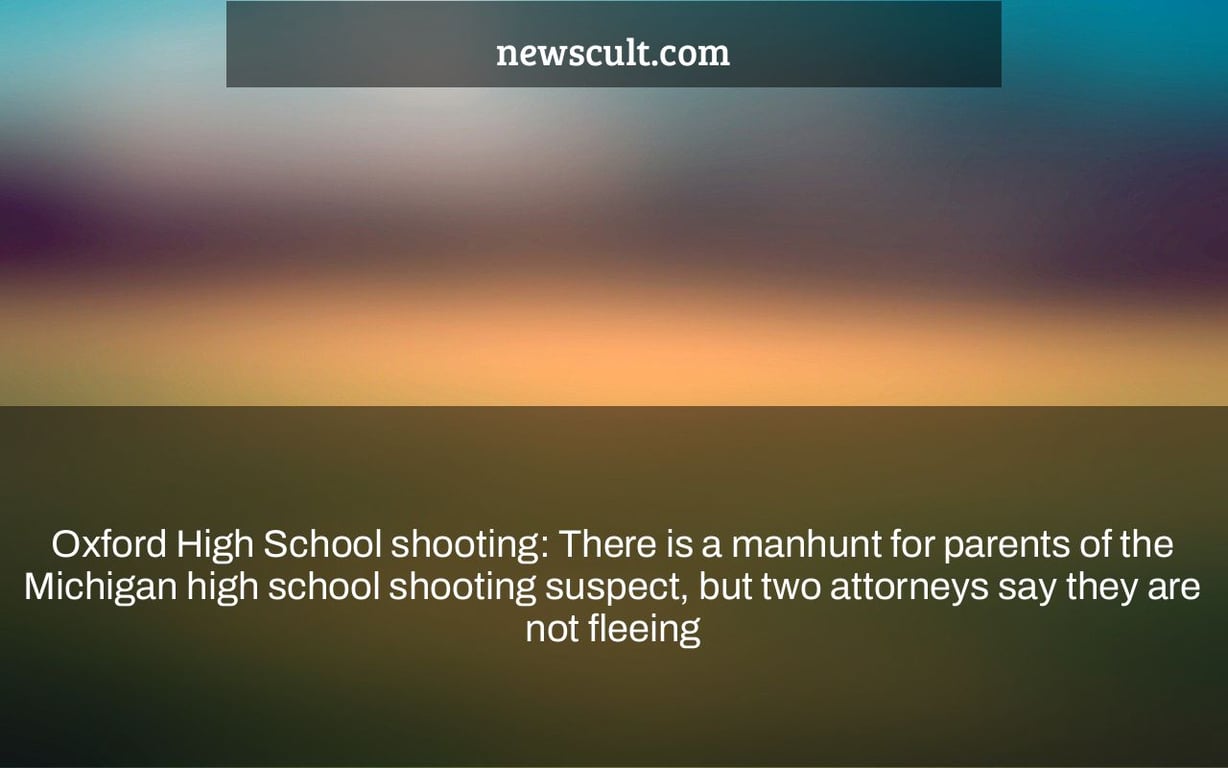 However, two lawyers claiming to represent the Crumbleys made a statement saying the pair had left town for their safety and would return for an arraignment.

Attorneys Shannon Smith and Mariell Lehman stated in a statement that “on Thursday night we called the Oakland County prosecutor to address this case and to notify her that James and Jennifer Crumbley would be bringing themselves in to be arraigned.” “Instead of speaking with us, the prosecutor announced charges during a news conference.”

“They are not running from law enforcement,” the statement said, “despite recent media claims.”

The parents took $4,000 from an ATM in Rochester Hills, Michigan, on Friday, according to a law enforcement officer. Oxford is around 10 to 15 miles from Rochester.

Law enforcement had previously been able to trace the couple’s locations through mobile phone pings, but this is no longer possible since the couple’s phones have been switched off, according to the official.

The time the phones were switched off was not specified by the source.

The parents’ arraignment was supposed to take place late Friday afternoon, but they were still missing as of Friday evening, according to the Oakland County Sheriff’s Office.

According to CNN, a sergeant from the county’s fugitive task force met with one of the lawyers, who said she had not really spoken with the parents.

The undersheriff expressed confidence that the pair would be discovered and that it is just a matter of time.

Law enforcement had not spoken with James and Jennifer Crumbley, according to Sheriff Michael Bouchard, but their attorney had notified authorities that if charges were filed, she would make preparations for their arrest.

He said that the attorney had tried unsuccessfully to contact the parents via phone and text.

“Correct,” Bouchard responded when CNN inquired whether the parents were missing.

The sheriff said that every possible resource is being used to locate them, and that no one should approach the pair. According to Bouchard, US Marshals and the FBI are participating in the hunt for the Crumbleys.

The hunt is being led by the US Marshals Detroit Fugitive Apprehension Team, according to a tweet from the agency.

According to the sheriff’s office, the Crumbleys may be driving a black 2022 Kia Seltos with Michigan license plate number DQG 5203.

A criminal defense attorney in Georgia, Page Pate, warned that the parents may not be on the run.

Pate told CNN, “I’ve been in this situation before, defending someone who has just been charged with a felony.” “They have a proclivity for panicking, and when they panic, they do dumb things.”

According to Pate, the parents may be seeking for a new counsel who will provide them the answers they desire.

CNN attempted to contact the parents’ attorney multiple times, but she did not respond to messages requesting comment.

Prosecutors will attempt to establish that the parents of alleged shooter Ethan Crumbley were criminally negligent and contributed to a hazardous scenario that culminated in the deaths of four teens on Tuesday in this unusual case of parents being charged.

At a news conference, Oakland County District Attorney Karen McDonald remarked, “It’s been a sad week for us.” “There are other people who contributed… and I want to hold them responsible as well.”

On social media, his mother referred to the weapon as “his new Christmas gift,” according to the prosecution.

James Crumbley purchased the rifle four days before it was used in the shooting, according to McDonald. Ethan, who was with him at the time, subsequently tweeted about the rifle on social media, calling it “my new beauty.”

Jennifer Crumbley, according to McDonald, also wrote about the rifle on social media, calling it “his new Christmas gift.”

According to McDonald, these are some of the incidents that lead up to the shooting.

According to Bouchard, the youngster could not lawfully possess or carry the pistol in most areas, with the exception of shooting ranges.

In the rampage north of Detroit that left seven people injured, Ethan Crumbley has been charged as an adult with terrorism, murder, and other crimes. The shooting was the 32nd such incident on a US K-12 school since August 1, and it was the bloodiest since 2018.

Officers were prepared to arrest the parents, according to Lt. Tim Willis, chief of the Oakland County Sheriff’s Office’s special investigations section.

McDonald told reporters that she was prosecuting the parents partly to make a statement about gun ownership responsibility, but that the circumstances of the case were terrible on their own.

“As a mother, I’m furious.” As the prosecutor, I’m furious. “As a resident of this county, I’m furious,” she remarked. “There were a lot of things that could have been avoided so easily, and yeah, there was a flawless reaction, and he was captured right away, and we have excellent law enforcement and training.”

“However, as I already said, four children were killed, and seven more were wounded, therefore I believe we should all be extremely furious.”

The prosecutor lays forth a terrifying sequence of events.

“On the same day, Jennifer Crumbley texted her son about the event, saying, quote, ‘LOL, I’m not furious with you.’ You must learn to avoid being captured.’ end quote, “McDonald stated his opinion.

A teacher noticed a message on Ethan Crumbley’s desk the day of the shooting that concerned her so much that she snapped a photo of it with her phone, McDonald said. “The thoughts won’t stop. Help me,” she said in the message, which featured a depiction of a semiautomatic weapon pointed at the words.

A bullet was drawn in another place, with the words “Blood Everywhere” scrawled above it. McDonald claimed there is a picture of a person who seems to have been shot twice and is bleeding between the drawing of the pistol and the bullet.

McDonald said, “Below that figure is a painting of a laughing emoji.”

According to McDonald, the message also said, “My life is pointless” and “The planet is dead.”

McDonald said James and Jennifer Crumbley were “immediately called to the school.” According to McDonald, a counselor visited with the parents and the youngster, who had revised the painting by erasing off the depictions of the pistol and bloodied figure, as well as the phrases.

McDonald said the parents were ordered to get their kid into therapy within 48 hours. According to McDonald, neither parent requested their son to see the pistol or “inspect his rucksack for the existence of the gun that he had with him.”

The youngster was sent back to class after his parents departed.

Jennifer Crumbley, according to McDonald, texted her son after hearing about the incident, saying, “Ethan, don’t do it.” James Crumbley contacted 911 to report a lost pistol and the possibility that his son was the shooter.

Investigators discovered the pistol used in the shooting in an unlocked drawer in the couple’s bedroom, according to McDonald.

Officials from the school said no disciplinary action was necessary.

The school district administrator indicated Thursday that no disciplinary action was necessary when the discussion was place before the incident.

“There was no need for disciplinary action. At the high school, there are no disciplinary records “The superintendent of the Oxford Community Schools, Tim Throne, stated in a video message on Thursday. “Yes, this student spoke with our front desk. His parents were, in fact, on campus on November 30th.”

McDonald told CNN Thursday night that there is a “high likelihood” Crumbley had the pistol he allegedly used in the attack in his rucksack during the meeting.

According to Bouchard, the Oakland County sheriff, the school’s video security cameras would allow investigators to “truly map out precisely and physically observe what the offender did” from that meeting through the shooting and his arrest.

He stated the shooter had the pistol “on his person, in his bag, or somehow hidden” it away from the school.

Another red flag had appeared the day before the shooting, when a separate instructor “observed and heard something that she believed was alarming” in relation to Crumbley’s classroom behavior, according to Bouchard. Crumbley was counseled by school administrators about his actions, and his parents were alerted via phone, according to Bouchard.

On Wednesday, Crumbley’s lawyer urged the court to submit a not guilty plea on his behalf. Ethan Crumbley is being represented by a new lawyer, according to CNN.

The school is like a “war zone,” according to the superintendent.

Oxford High Campus is “like a battle zone” two days after the tragic incident, Throne said in a 13-minute video released on YouTube from the school.

“Right now, this high school is a shambles,” he added, adding that repairs might take weeks.

Madisyn Baldwin, 17, Tate Myre, 16, Hana St. Juliana, 14, and Justin Shilling, 17, were killed in the incident, according to authorities.

Throne praised students and staff for their response to an active shooter threat, during which some officials administered CPR and students barricaded themselves inside classrooms with tables and chairs for safety.

As police arrived to the school at 12:52 p.m. local time, more than 100 calls to 911 were made to report the shooting, according to Bouchard. The gunman surrendered “two to three minutes” after authorities arrived.

“I think they really saved lives,” the sheriff stated, referring to the fact that the suspect was brought down with a loaded handgun still in the premises.