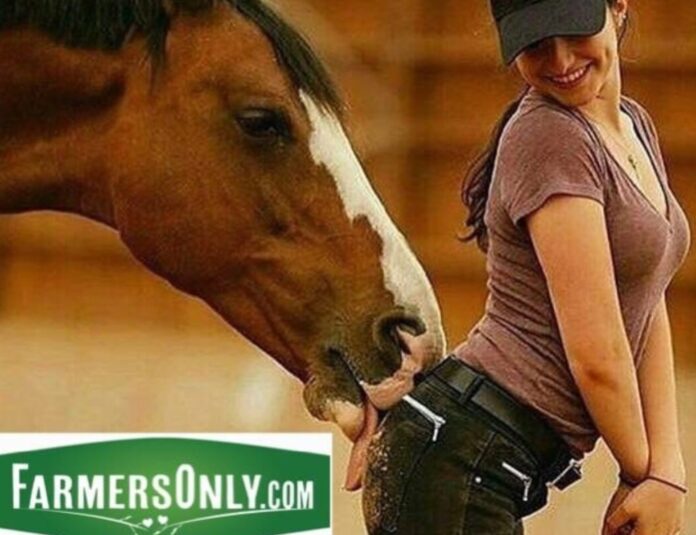 How wretched of a fate to be sitting at home, enjoying a pleasant broadcast of a weekday morning Gilmore Girls marathon, when your regularly scheduled programming is interrupted to bring you this crock of horse shit:

Since this early advertisement for the site, which is called FarmersOnly.com (and whose commercial appears to be made on Windows98 programming; seriously, you think you could put up some fucking Flash?), was first broadcast in February 0f 2007, a slew of likeminded and increasingly more offensive commercials for FarmersOnly, a site created in 2005 by marketer, Jerry Miller, have begun popping up.

In their first advertisement, which still continues to play nearly nine years later, a talking horse, dog, and group of cows converse with one another about how lonely “Jill” is, as she’s out “walking the corn field again”.

The catchphrase of these commercials? “City folks just don’t get it.”

The most recent ad I had the pleasure of being tormented by, involves a “country feller” who’s outfit consists of leather boots with spurs and a cowboy hat, trying to lift his date, a “city folk”, onto a horse, as she complains. The dude then sits back and speaks to his Australian shepherd, who asks him “Why he’d ever date a city girl”; he smirks and shakes his head as he watches his date scream out in pain and get dragged through manure by the horse, before crashing through what sounds like glass.

Rather than rushing to the injured female’s aid, the man instead continues listening to advice from his dog, who tells him to log onto a dating app on his phone, to scour for alternative options, of whom he might feel better suited to. As he logs on, a trail of beautiful women, each more out of this asshole’s league than the next, come cantering towards the porky schmuck on horseback, all in jeans and cowgirl hats, which I guess is the viewer’s context clue that these are all the same breed of “country folk” as the rude man and his dog.

Because this is what this gross dick should be rewarded with, right? I mean, did this man even ask the original woman, who is probably off lying somewhere, covered in horse dung and blood from the window she was thrown through, what she wanted to do on their date? He obviously didn’t tell her where they were going, instead just catching her completely off guard with a surprise trip to the barn, as one can assume upon close observation of the four inch pumps on her feet.

Why is this awful date her fault? Not to mention that she can’t be that much of a materialistic city folk if she agreed to go out with this piggish troll in the first place; seems to be doing him a favor given his shitty looks and even shittier personality.

As someone who has literally absolutely nothing better to do with their life/time, I decided to create my own account as a social experiment. The first idiocy I noticed, involved the choices listed under the “employment” category, which included a lengthy list of career options: “raise dogs”, “raise alpacas” (I fucking wish), “dairy farmer”, “raise goats”, “farmer wanna-be”, “other cowboy/girl”, and “raise deer/elk”. I selected “farmer wanna-be”, and kept it moving.

The next layer of shit I observed, came when I clicked the option to “send a flirt” to someone.

Upon clicking here, the user is provided with a list of “witty” messages to send to future suitors, which range from “I see you like John Deere too”, “wishing you a HAPPY HARVEST!”, “I LIKE your truck”, and “How about that tractor!”, and even included lines like “which is faster: you or your horse?” and “Do you have an empty stall for me?” (what in the actual fuck).

I had a suspicion about the type of people on a site like this.

You know: Keystone Light-drinkin’ rednecks, who enjoy treating women like garbage and who love guns, and making females out to be nothing more than shitty annoyances who waste a hard workin’ Murican’ man’s time that he could be using to shovel cow shit or fix the seat of his tractor out in the field with his tool box.

On a free-word association test, where I was shown a picture of this website, the first thing I would scream out would be TRUMP SUPPORTERS. To me, it was almost as if the company’s creators had manufactured a site where one could go to meet anyone with the same wretched and ill-advised political opinions as their own. So I began to do some investigative journalism.

The first few messages I got off the site, I immediately responded to with “and how do you feel about Donald Trump?” Some of them I even responded back to by “sending a flirt,” always opting for the “Do you have an empty stall for me?” option, hoping my selection would paint me out to exhibit just the most desirable behavior possible of a female in whatever bizarre parallel society of delusion these people exist in.

Wasn’t long before the responses started rollin’ in. The first one came from a strapping 35-year-old gentleman, who describes himself as “KING LOOKIN FOR HIS QUEEN”. On his profile are tons of pics of him dressed in a hard hat and his union uniform, drinkin’ forties of Budweiser while straddling his Suzuki motorcycle, or just kickin’ back on a parked jetski. His response to the question? “I work for the man so I’ll have to say I’m pro trump.” Ah. What a surprise.

Next up came a response from a 30-year-old high school grad, who looked pretty normal and who “stays busy working with cattle and machinery on his dairy farm”. His response: “I don’t think I could vote for Hillary. What do you think?” Don’t really know what to say there, as there are a plethora of other options. Kind of the issue, no? Sheep who believe that the only two options are Hillary Clinton and Trump? NEWS FLASH: THIS DECISION HAS NOT YET BEEN MADE.

Another young farmer seemed paranoid, and asked me why I would ask that, following it up by telling me “I don’t care about that stuff really, I’m pretty easy going”, before berating me for “asking a pretty dumb question”.

Next rolled in a response from a 22-year-old organic crop farmer who LOVES tractor pulls, who claimed “I’m all for D. Trump, how about you?” Excellent. Nothing wrong with making your life’s work the repairing of antique tractors, but very much something wrong with being an uneducated moron.

Another 24-year-old dude, who enjoys “drinkin’ some brews” and “workin at the harness racin track”, thought I was joking with that question at first, a response which gave me some hope. Unfortunately, he followed that up by announcing to me that “he doesn’t pay much attention to politics, but he thinks a lot of people can relate to Trump’s ideas, which makes him popular.” Fan-fucking-tastic.

The reason why these answers bothered me even more is because of the site’s initial mission statement.

In a 21 March, 2012 article for Business Insider entitled: “This Dating Website Is For Anyone Who Shuns The ‘Corporate Rat Race’”, author Abby Rogers wrote: “Farmers often have a less materialistic view of the world than their urban counterparts, Miller explained, adding that there is ‘definitely a divide’ between people ‘in the corporate rat race’ and those in rural areas. ‘There’s a pretty big difference’, he said.” This seems pretty fuckin’ ironic, when you poll the opinions of these people, who seemingly all plan on voting for the one man who is probably the most materialistic of all men in history and the man who’s life’s work is the domination of said “corporate rat race”. A man who seems intent on using people like mice in some awful experiment, purely based on the giving of hope to moronic dumbasses that he will “make America great again, by coming up with half-assed plans to “build walls” over borders, and “crush ISIS” by encouraging mass Islamophobia of the completely politically uninformed. In fact, the only candidate who does in fact ‘shun’ any kind of ‘corporate rat race’ is Senator Bernie Sanders, the one individual who has faith in small businesses and no time or love for a nation powered by a small group of the ridiculously rich. It just seems a little contradictory.